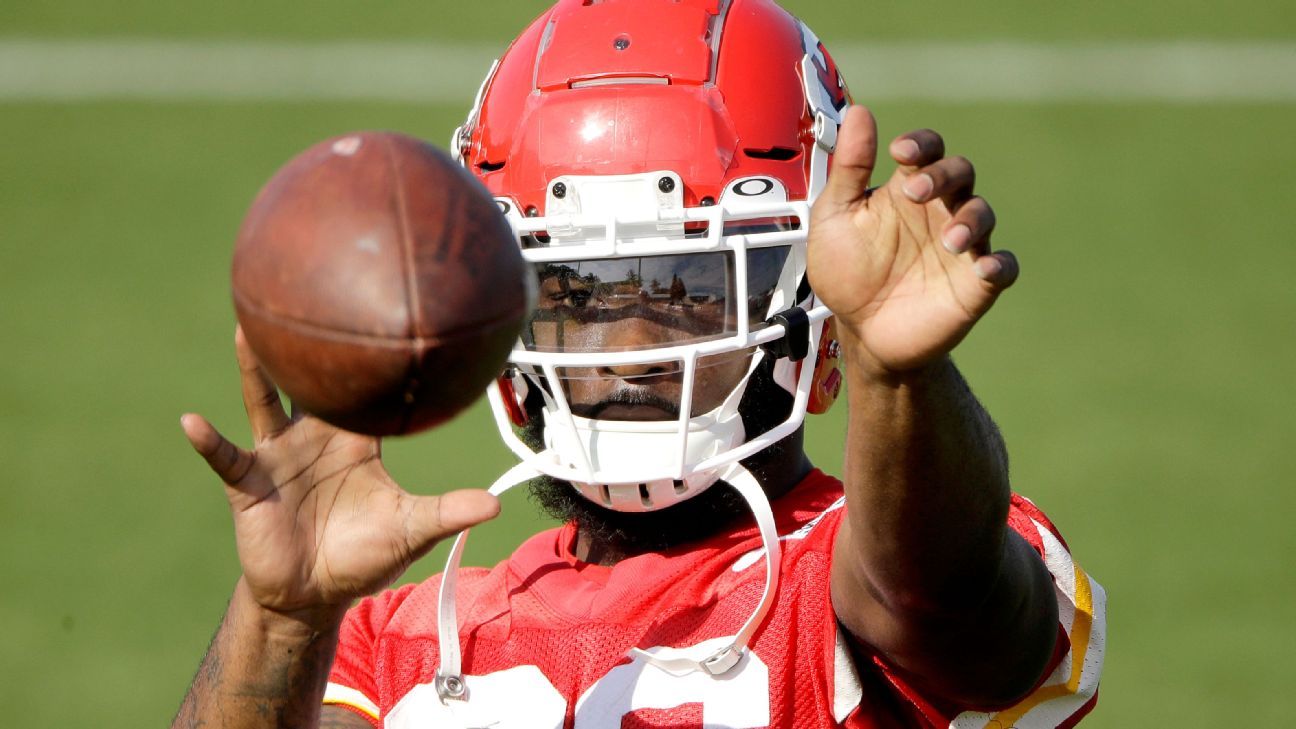 ST. JOSEPH, Mo. — Damien Williams said he spent the offseason preparing for his role as a full-time featured back for the Kansas City Chiefs.

Williams, 27, enters the season as an RB1 for the first time in his career and said he has been focused on things like nutrition and hydration — things that will keep him healthy during a long season.

The early returns, though, are not encouraging. Williams missed most of the first two weeks of Chiefs training camp because of a sore hamstring. He returned to practice late last week but didn’t play in Saturday night’s preseason opener against the Cincinnati Bengals.

Williams regained his spot as the Chiefs’ No. 1 back on Monday when they returned to camp. But his lack of availability so far illustrates how the Chiefs are taking a chance on the unknown by counting on Williams.

“There’s a certain challenge that comes with that [job],” coach Andy Reid said. “That’s a tough position to play. You have to prepare yourself on and off the field.”

Williams played well late last season after taking over the Chiefs’ lead back role when they released Kareem Hunt. But many backs have proved they can handle the load for a short period of time. Fewer can handle the demands of a physically and mentally draining job over the longer term.

“It’s a good early reminder that the little things like stretching and hydration really matter,” general manager Brett Veach said of Williams’ early camp injury. “Those are things elite-level players do away from the field.

“It’s just a matter of acclimating his body to that kind of workload. He has to figure out the stuff away from the field: diet, extra treatment and things like that. Sometimes when you’re a guy that has been a role player your entire career, you don’t get a lot of wear and tear. There’s not a lot of need to stay in the training room and there’s not a lot of need to watch exactly what you’re putting in your body. Now all of a sudden you’re talking 16, 18, 20 carries a game over the course of a 16- and hopefully a 19-game season, that will take a toll on you.”

“I had to change my eating habits,” he said. “I actually did this thing where they draw your blood and tell you what’s actually necessary for you. I kind of just picked up the workload when I’m working out, doing a little more, doing a little extra because you know even though this is my sixth year I’ve never had the role of the starter or have had to take the bulk of the reps.

“I learned I’m allergic to spinach. I can’t eat spinach, obviously. It’s cool to just kind of learn what you can and can’t eat and what I’ve been eating thinking, ‘this is good,’ but it’s not good for my body type.”

To celebrate 100 years of pro football, Peyton Manning travels the country to see the people and places that made the NFL the NFL.
Watch on ESPN+ » More »

Last season Williams rushed for 256 yards on 50 attempts (5.1 yards per carry) and had four touchdowns. He also rushed for 129 yards and a score in a divisional-round playoff win over the Indianapolis Colts. Now he has to prove he can sustain it. The Chiefs are comfortable Williams is mentally tough enough to make the leap.

“There’s no question about his desire,” Veach said. “He’s one of the toughest guys on our offense. He just has to make sure he knows that wanting to be that guy on the field, there’s another part to that. So I’d say when he has his helmet on, he’s ready for this. When he takes it off, that’s when he’s going to have to grow. To go through the violence and the amount of hits he’s going to take, it’s a lot different than what he’s used to.”

The Chiefs have alternatives. They signed veteran Carlos Hyde, who was the starter in Williams’ absence. They brought back Darrel Williams from last season. They drafted Darwin Thompson, who has played well in camp and in the preseason game against the Bengals (five rushes for 22 yards, one catch for 29 yards and a TD).

Each figures to have a role as the season progresses. But offensive coordinator Eric Bieniemy said the Chiefs would be patient with Damien Williams.

“He’s the starter,” Bieniemy said. “We need to make sure than Damien continues to do the things he needs to do in order to help himself be ready when called upon.” 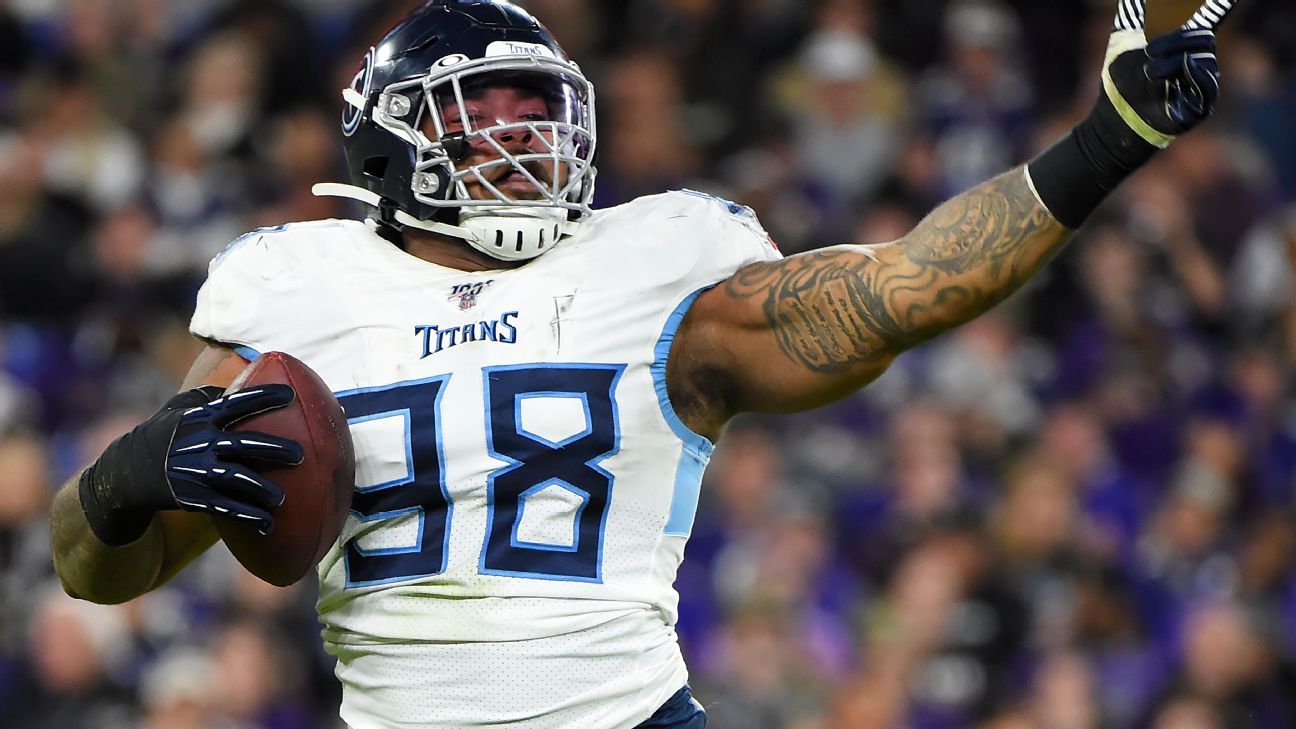 Tennessee Titans defensive lineman Jeffery Simmons was not fined by the NFL because there was no visual evidence of him spitting on Baltimore Ravens guard Marshal Yanda.

After the Titans’ 28-12 divisional playoff win in Baltimore, Yanda accused Simmons of spitting in his face.

“I’ve never been spitten in my face,” Yanda said Jan. 11. “I literally got spit right in my face by No. 98. He needs to be put on notice by the refs, by the entire NFL. He was saying some stuff today that’s just ridiculous conduct for the NFL. I just want to put him on notice. That was ridiculous conduct.”

On Wednesday, Simmons didn’t deny he spit on Yanda.

Asked if he spit on Yanda, Simmons said, “Like I said, I’m moving on from that game. I know what I did and what I didn’t do.”

If the allegation had been proven correct, Simmons would’ve been fined $14,037 for unsportsmanlike conduct.

The Ravens play host to the Titans next season. 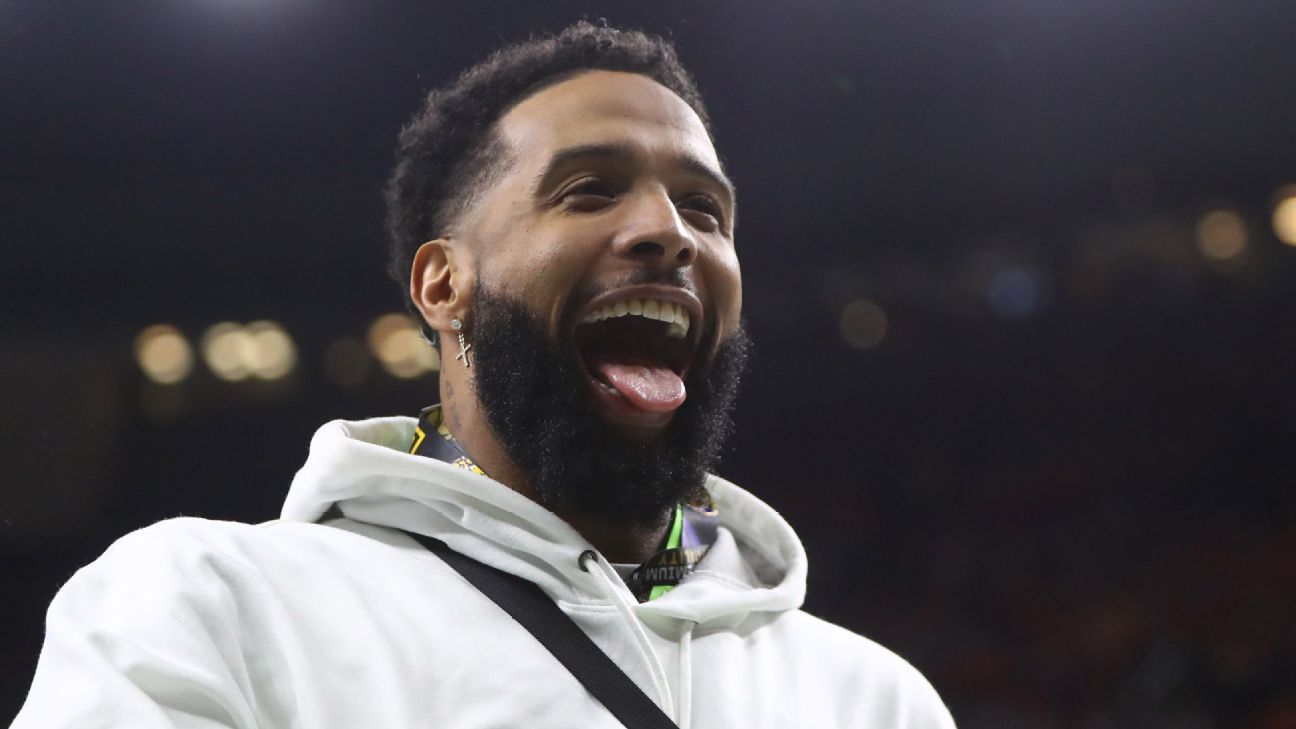 Odell Beckham Jr.’s legal issues in his native Louisiana appear to be over.

The Cleveland Browns wide receiver was potentially facing a misdemeanor charge of simple battery for slapping the buttocks of a Superdome police officer in the LSU locker room after the Tigers’ national championship victory over Clemson on Monday in New Orleans.

However, the officer in question signed an affidavit saying he did not want to pursue charges, Beckham’s lawyer, Daniel Davillier, said in a statement Saturday.

Later Saturday, a spokesman for the Orleans Parish District Attorney said, “Absent a complaining witness, this is not a case our office intends to pursue.” The New Orleans Police Department has not yet commented.

No case had been instituted against Beckham because no arrest was made. And since it was not a felony charge, the Orleans Parish District Attorney’s office was not involved in the decision.

Beckham also was seen on video passing out money to several LSU players immediately after the Tigers’ 42-25 victory.

The 27-year-old Beckham is from New Orleans and played for LSU.

The university’s athletic department issued a statement Wednesday saying it was aware of video showing “apparent cash” being given to players by Beckham and that it had been in contact with the NCAA and the Southeastern Conference regarding the matter.

The warrant out against Cleveland Browns wide receiver Odell Beckham Jr. has been recalled, his lawyer said Saturday.

The news comes after an officer signed an affidavit saying he did not want to pursue charges, Beckham’s lawyer, Daniel Davillier, said in a statement.

As result, Davillier said, “This legal matter has been resolved.”

Beckham was potentially facing a misdemeanor charge of simple battery for slapping the buttocks of a Superdome police officer in the LSU locker room after the Tigers’ national championship victory over Clemson on Monday in New Orleans.

Beckham, 27, is from New Orleans and played for LSU.

According to the law enforcement source, the Superdome officer said in his affidavit that he was a commissioned law officer who chose on his own not to file an arrest. The source expects the NOPD to withdraw the warrant as a result — which would effectively end the case against Beckham. The NOPD has not yet commented on its plans.

No case has been instituted against Beckham because no arrest has been made. And since it is not a felony charge, the Orleans Parish District Attorney’s office is not involved in the decision at this stage.

Beckham was also captured on video passing out money to several LSU players immediately after the Tigers’ 42-25 victory.

The university’s athletic department issued a statement Wednesday, saying it was aware of video showing “apparent cash” being given to players by Beckham and that it has been in contact with the NCAA and the Southeastern Conference regarding the matter.